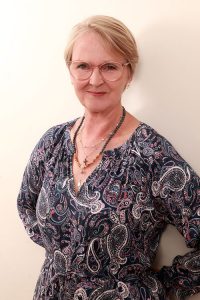 Since leaving WEA, Elizabeth has continued to produce a weekly Religious Liberty Prayer Bulletin (RLPB) to facilitate strategic mission, aid, advocacy and prayer. Additional news and analysis is posted to Religious Liberty Monitoring and linked to via the RLPB. She also maintains a site dedicated to Critical Prayer Requests (CPR) for nations where Christians are persecuted.

Elizabeth is the author of two books (click here for more information or to purchase):

Elizabeth Kendal is an Adjunct Research Fellow at the Arthur Jeffery Centre for the Study of Islam at the Melbourne School of Theology (MST).

From January 2013 to March 2022, she served as Director of Advocacy and Principal Researcher and Writer for Christian Faith & Freedom (CFF), Canberra, Australia.

In December 2014, Elizabeth was awarded an honorary Doctor of Ministry degree from Wittenberg College and Seminary (Canada).

Elizabeth is the mother of four adult children. Her consuming passions include family, home and local church; gardens, dogs and birds; history, theology and music (for which she has an A.Mus.A (flute) and a B.Ed (Mus)). Elizabeth lives in a traditional hills cottage in the foothills of the beautiful Dandenong Ranges east of Melbourne, Australia.

It was a winter’s evening in August 1998 and I was in the kitchen preparing dinner for my family with the TV news on in the background. I heard the newsreader say that Copts in Sydney had staged a silent demonstration in protest of the arrest and torture of over a thousand Copts in Upper Egypt. [The Copts are the indigenous people of Egypt, the true descendants of the Pharaohs. At the time of the Arab invasion in the 7th century, the Copts (lit. Egyptians) were overwhelmingly Christian.] It was the briefest of sound-bites, over film footage of several hundred Copts marching quietly down a main street in central Sydney bearing banners, icons and crosses.

It struck me that the subject of the story was the march, not the arrest and torture of over 1000 Copts. It also struck me that if the victims had been journalists or political activists or people of colour or LGBTQ then they would have been the subject of the news item and the “international community” would have been outraged at such an appalling abuse of human rights. Over subsequent days I was also struck by how difficult it was to find information about what was happening in Upper Egypt, for mainstream media clearly did not regard it as newsworthy. My need to understand was absolutely all consuming. I didn’t realise it at the time, but God had hooked me and was reeling me in!

While searching for information, I stumbled across the International Coptic Association. It was brimming with information – including testimonies and photographs – information that the mainstream media had little interest in; information they were more than pleased to share with me. Days earlier, a Muslim youth gang had driven into the village of Al-Kosheh, Sohag governorate, Upper (south) Egypt, and dumped off the bodies of two local Coptic Christian boys who they had earlier abducted and murdered. Several witnesses reported the crime, but because the police were reluctant to prosecute Muslims for a crime against Christians (something they knew would trigger Muslim rioting) and because members of the gang were related to senior police, the security forces exploited Egypt’s Emergency Law to arrest all the Copts in the village and set about framing a Coptic scapegoat. Women were abused and beaten in front of their husbands. Children were abused and beaten in front of their parents. Men were violently assaulted and tortured in front of their families. All this was undertaken by Egypt’s notoriously corrupt and brutal security forces for the purpose of extracting a confession from a Christian Copt so that the Muslim murderers could walk away with impunity. As far as the mainstream media was concerned, this gross abuse of human rights and total perversion of justice was not newsworthy; or at least it was too politically incorrect to touch.

Some days later, as I stood in my kitchen pondering all this, I became totally convinced that God was calling me to devote myself to informing the church of what the media won’t, specifically so the church can engage in strategic prayer.  I had absolutely no doubt that what we were witnessing was a spiritual struggle which necessitates the use of spiritual weapons (Ephesians 6:10-18; 2 Corinthians 10:3,4). And in this spiritual struggle, the first obstacle to overcome is ignorance.

Since that day, I have devoted myself to combating this ignorance while trusting the Holy Spirit to work in the hearts and minds of Christians and non-Christians, including lawmakers, and to facilitate action. To this end, I have devoted myself to study and prayer with the specific aim of understanding persecution – historically, politically, sociologically and theologically – so that its root causes might be strategically addressed through government policy, international advocacy, Christian mission and intercessory prayer (which I maintain is advocacy to the highest authority).

God has graced me (although often it feels more like a curse!) with a heart that yearns for those who suffer and struggle, and for believers who find their faith sorely tested. For me this ministry is not simply about justice and human rights. For me this ministry is principally about mission and endurance, with hope rooted in the promises of God.